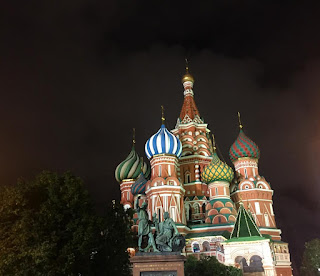 It’s no secret that I spent five months living in the spectacularly misunderstood city of Moscow, Russia. I studied at Lomonosov Moscow State University on a program offered by my home university and I lived in an apartment with 3 other girls on my program who were from around the country. First thing’s first: Moscow (and Russia) is insanely cheap for Americans, as the ruble is worth a lot less than the dollar. I made $2000 stretch me all five months without really living on a budget. We drank, we ate, we enjoyed ourselves. It was the time of my life. Typically my roommate and I would go grocery shopping every week or two to buy our food, as we spent a lot of time together including studying, eating, and just hanging out. On average, we would spend around 2,200-4,000rub ($40-60USD) per week on a full haul of groceries, including alcohol. Like I said, CHEAP. In addition to that, I would put 1,000rub ($15USD) per week on my troika (metro) card, which I used constantly-going to and from school, to and from the mall, around the city as my main mode of transportation.
*I am aware that it is not a cheap city for most others that live there. We as Americans are simply lucky that our money is worth more there.*
Next, Moscow is architecturally confusing. It’s incredibly common to find gorgeous, intricate, brightly colored pre-Soviet buildings next to stark, imposing Stalinist style ones. It’s just how the city grew and developed during the 80 years under communist rule. In my opinion, the star of the city is the vast and expansive metro system. Built during the Cold War to act as bunkers for the city’s residents, many of the stations look and feel like museums and art galleries. Fun fact about the metro, when Stalin was given the plans for the metro lines to sign off on them, he placed his coffee cup down on the blue prints, creating a brown ring on the paper. As the story goes, the architects were too afraid to question whether that was on purpose or not, so they went ahead and built the ring line that encircles the center of the city! If you are out and about past 1am, the metro will be closed and you will need to find another way back to wherever you are staying-I would recommend using Yandex Taxi or Uber. Both are relatively inexpensive and you can order a car right from the app/website. I personally prefer Uber over everything, as I don’t need to worry about getting scammed/overpaying and can see exactly where the driver is taking me.
For being a major city, a large portion of the population either doesn’t speak English or speaks very little. The further out from the tourist center you travel, the number decreases. This can obviously cause an issue if you do not speak Russian. Good news though, as I said, those who stay within the tourist area of Moscow (Red Square, Arbat, etc.), plenty of workers speak English, so you should be just fine. Many restaurants in these areas also have English menus, so no need to struggle with reading or using Google translate when out to eat or at a café. 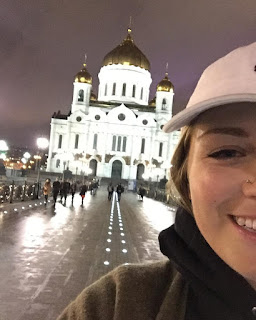 The visa process wasn’t too difficult for us, as we did everything through a courier agency. All we had to do was fill out the visa application online, send in the results of our HIV blood tests (only required for student visas, not tourist visas), and send that into our program director along with the payment and our passport. It took a bit for our passports to come back (I received mine about a week before my departure), which was the most nerve-wracking part of the process.
Moscow is a pretty easy city to navigate, as there are ring roads that all other roads branch out from. While it’s not as English friendly as Petersburg is, it is definitely a stop that should be included on any itinerary for Eastern Europe. Yes, the visa process can be annoying and cumbersome, it’s so worth it for such a beautiful country.

Stop Telling Me to Be Careful