I’ve written a lot about how much I absolutely adore Moscow and how it is hands down my favorite place in the world. Well today, I’d like to talk about a city I recently visited that I had never really thought of visiting but ended up loving– COPENHAGEN! 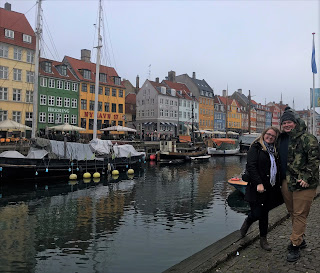 My boyfriend and I decided to book a trip to somewhere in Europe so that he could get a taste of being overseas for the first time in his life. I spent days scouring Google Flights and Skyscanner looking for cheap flights- I knew it was off season, so it would be the cheapest time to go anywhere. I ended up finding a great deal on Google Flights for Norwegian- NYC-Stockholm-Copenhagen-NYC for a total of $356USD. I was floored, so almost immediately we booked the flights.

We stayed in Stockholm for three days, and boy was it different from any place I had been before. It was beyond expensive, which made it a little bit difficult for us to fully enjoy ourselves. We did a lot of walking around and sightseeing, but we ended up seeing everything we wanted to/could see and ultimately ran out of stuff to do. Stockholm was a beautiful city, but if I were ever to return it would have to be in summer.

Now, Copenhagen was a different story. We had an absolute BLAST there! It was a bit cheaper than Stockholm, so we were able to relax about our finances a bit and take in all the city had to offer. We each purchased a Copenhagen Card at the airport, which was a great idea since it gets you free public transportation around the city and free entrance to a ton of museums. We spent around $100USD per card, so it was a pretty good deal. I would definitely recommend getting it if you visit Copenhagen- especially during the summer since a number of the attractions were closed! However, Copenhagen still has a huge number of things to do. I think our favorite part of our time there was going to the Carlsberg Brewery and following it up with a stop at a canteen called War Pigs! I wrote briefly about the two in an earlier post, but I’ll go into a little more detail now. Carlsberg was the first brewery in Copenhagen, founded in 1847-that make it over a century and a half old! At the brewery, your self guided tour gives you a detailed history of the brewery, along with showcasing the museum’s massive bottle collection from around the world! When we visited, there was over 22,000 bottles in the entire collection, with 16,000 of them being out on display. Talk about dedication! Just gazing at the aisles of beer bottles was super cool in and of itself, as there were bottles from every corner of the earth, including places you would never think brewed beer, like Laos! We also did a beer tasting which was only $15USD or so extra (ticket was free thanks to the Copenhagen Card!), and SO worth it. We got to try 3 different beers that they bottle, and our tasting guide was very knowledgeable and down to earth. After the tasting was done, we all took our free beer coupon that comes with every ticket to the bar and hung out there for awhile drinking before stocking up on beer and cider to bring back to the hostel with us. We were absolutely starving after spending three or four hours at the brewery, so we decided to head to a brew pub/canteen we had found online called War Pigs. It featured American BBQ dishes such as pulled pork, brisket, chicken, etc. along with typical BBQ sides like bread, mac n cheese, and so on. We washed all of it down with some of the 20+ beers they had on tap and let me tell you…the BEST BBQ and beer I have ever had in my life! 10/10 would recommend for anyone. It also helped that it wasn’t outrageously expensive, so we got heaping portions for maybe $15USD.

The city of Copenhagen has an amazing vibe to it. The pedestrian zone reminded me so much of Munich, it was great. There was just something about being there with not many other tourists around, that gave it a magical feel. We were able to wander museums unbothered, had no problem finding a café to chill in and have some coffee and pastries, and just really enjoy ourselves wherever we went. I definitely wish that we could have spent more time in Copenhagen, but hey-now we have a reason to return when the weather is nicer!

Shamelessly Traveling My Life Away

The Silver Lining of the Go