I’m a true fat kid. I love food, I love drinking, and I love doing both while traveling! Relying on Western food while traveling is lame and does nothing for your cultural experience when abroad. Eastern Europe has some of the best and most delicious food I’ve ever had in my life! Let me take you on a food tour of my favorite dishes from my travels.

This is an easy one. I LOVE pierogi, even before I stepped foot in Krakow. I’m pretty sure I had them at least once a day, every day that I was there (usually with some Zubrowka as well). My favorites were traditional Polish pierogi with meat and Russkie pierogi with potato and cheese…so many carbs but SO WORTH IT! 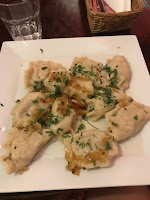 Serbia
Cevapi is my newfound favorite dish from around the world. They’re essentially finger sausages that consist of minced meat and a myriad of spices, usually served with sour cream and a sliced pita bread. I think I ate them nearly every night that I was in Belgrade, they were out of this world and so cheap too! 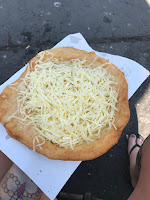 I had tried both goulash and chicken paprikash on separate occasions while living in Russia, so I was excited to try the real, authentic dishes in Hungary. Boy, did they pass my expectations! True Hungarian goulash is a lot different than the American version, which is just pasta with onions and meat/tomato sauce. The authentic version is more of a stew, very thick and hearty and often served with some sort of side starch like pasta, nudel, or potatoes. Chicken paprikash is chicken served in a paprika-cream sauce and again, some sort of side starch and both are out of this world. Honestly though, langos was a total surprise for me! It’s a super savory piece of deep fried dough topped with garlic butter, sour cream, and shredded cheese. So heavy but it’s literally the best hangover food.

Russia
I’m a sucker for carbs and starches, so pelmeni was a godsend when I first discovered Russian cuisine. I pretty much lived off of it while I was living there, as it was super easy to find and make after a long day of classes.

Germany
SCHNITZEL AND PRETZELS. I make schnitzel pretty regularly at home since I went to Germany, it’s so easy to make and so delicious. As for pretzels…I just really love carbs ok? Don’t judge me.

Cracking Open a Cold One in KRAKOW