My plan going into my trip was to make my way through the Balkans after I departed Budapest…too bad I loved Budapest too much and decided to stay way past my planned departure date. This left me in a spot where I had to decide to cut a stop out, and unfortunately that was most of the Balkans. However, I still wanted to at least go to Serbia, so I spent two relaxed days in Novi Sad, the capital of the autonomous region of Vojvodina and an amazing four days in the capital of Serbia and former Yugoslavian capital of Belgrade. I foolishly had higher expectations for Novi Sad than I did for Belgrade, as I imagined Novi Sad to be a whimsical little town full of old buildings and lovely architecture with cafes around every corner and Belgrade as a massive brutalist concrete jungle. And boy, was I far from right. 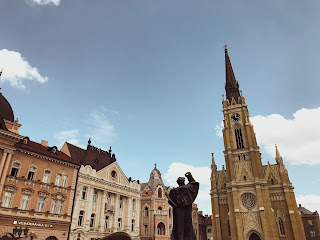 Novi Sad
So, as the capital of an autonomous region, Novi Sad is in fact a larger city than most in Serbia. I was a bit worried as I got off the bus into what was essentially the unknown. The trip from Budapest to Novi Sad was pretty horrible, so I was at least glad to have my feet on solid ground. The hostel I stayed at was in an impeccable location, literally at the entrance to the Old Town. One of the coolest things I did was go to the Museum of Vojvodina, which showcased artifacts found in the region that explained how life operated. Besides the rather picturesque Old Town, that was honestly the best part about Novi Sad. I was sick for the two days I was there so I found it a bit difficult to really enjoy myself.

Belgrade was so effing COOL! The hostel I stayed at was phenomenal- staff was super friendly and helpful and…THEY GAVE US UNLIMITED FREE RAKIJA! If you ever have the chance to try it, please do not pass it up. It’s a Balkan liquor made of plums and honey, so it is sweet and easy going down. Super pleasant to just sit around and sip during conversations. It’s so common that even our tour guide gave it to us! The city of Belgrade holds a ton of history, from the ancient Roman fortress that has been built and expanded over the centuries to the still-standing bombed out buildings during the NATO campaign in the country. It was a city that had an amazing vibe and someplace I feel like I need to return to and spend more time to just explore and enjoy myself instead of being constantly on the run. Plus, I found the greatest dish I’ve had in my travels-ćevapčići. They’re essentially Balkan sausages (I’ve heard the best are found in Sarajevo) and served with any sort of topping you want, usually onions and a chili sauce, with a pita style bread. It was delicious and I think I ate at least twenty a day the whole time I was there. If you ever make it to Belgrade, I highly recommend the Nikola Tesla Museum. It’s incredibly informative and they even have a number of his original inventions! (ps-the Church of St. Sava is incredible from the outside…it is absolutely massive. However, the interior has yet to be finished so it was a bit of a let down when I arrived.) 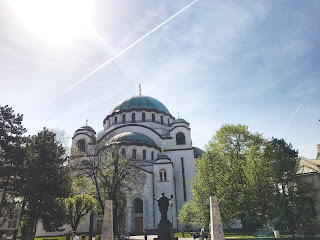 I honestly loved Serbia and enjoyed learning so much about the tumultuous history (and present) of the country and former Yugoslavia region as a whole. I really do hope that I’m able to make it back eventually to explore more, along with making my way through the Balkans! I definitely regret not doing that during my trip, as I feel like I missed out on a whole entire area I feel I would have absolutely loved.

You’re Not too Broke to Travel…