The first stop on my solo Euro trip was the absolutely enchanting medieval city of Prague, Czech Republic. The city of a hundred spires had been close to the top of my list since before I even discovered my adoration for traveling. I have the movie Chasing Liberty to thank for that (if you haven’t seen it, I would 10/10 recommend it- Mandy Moore rules!) 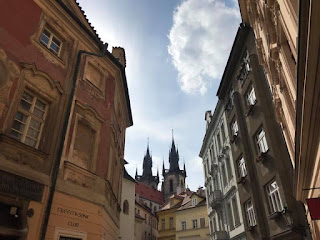 Where I Stayed
I had a bed in an eight-person mixed dorm at Hostel Prague Tyn-located literally steps behind Old Town Square and the Church of Our Lady Before Tyn, recognizable by its distinct gothic spires. I really enjoyed my time here! The location was impossible to beat for the price (~$17USD/night) and the place was really clean for the most part. Hands down the BEST showers I have ever encountered at a hostel-water pressure to die for. The free breakfast was a bit of a let down, as it was two types of cereal and tea/coffee. Nevertheless, free food is free food and I took advantage of it every morning.

What I Did
My first full day in the city I took advantage of one of the many free walking tours of the city, which definitely helped give me a nice introduction. I highly recommend Sandeman’s– I liked them so much I ended up taking 2 other tours with them during my time in Prague! Our guide Jeremy was super knowledgeable and informative about everything Prague, and threw in a ton of interesting and quirky facts and legends! I ended up signing up for the Prague Castle Tour with him as well later on that day, so I was able to see a huge amount of the city in just my first day alone.

My next day I started early with the Museum of Communism, and I really enjoyed it. I had no real knowledge about communism in Czechoslovakia, and as someone who is fascinated with Soviet communism, I think it was very detailed and insightful yet incredibly captivating and interesting way. I also made my way to the other side of the river to the ever so popular and cliché John Lennon Wall, where people are legally allowed to graffiti as a form of expression. It was just a quick stop, but it was cool walking along it and seeing all the different tags and pieces of art that people had thrown up. Because I was already in Mala Strana (the Lesser Quarter), I decided to visit the statue of baby Jesus, as it was relatively close to the Lennon Wall. It was a little bizarre honestly-they have an entire museum in part of this church that is dedicated to the robes of this baby Jesus statue! Whatever, it was still cool to see it since it has been going viral on Facebook lately. After baby Jesus, I made my way back to Old Town/Charles Bridge, where I found the Prague Beer Museum-which is not an actual museum. It is really a bar with around 30 or so beers on tap. Needless to say, I got a little drunk very early in the afternoon. After my much needed nap, I just wandered Old Town and Mala Strana as the sun went down and into the evening, just letting myself get isolated and lost as a lot of other tourists started to retreat. 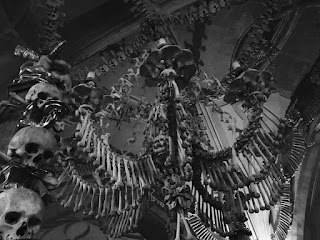 Thursday (my third day) I took a day trip to a town an hour and a half outside of Prague called Kutna Hora-famous for the Sedlec Ossuary, or as it is better known, the bone church. It was honestly one of the creepiest things I think I have ever seen in my life! The remains of thousands of people, many of whom died in the Hussite Wars and from the plague, are artistically arranged as décor throughout the entire ossuary. I would highly recommend everyone go see it when they visit Prague. Pro tip: take a tour! It makes it so much easier than taking the train or a bus and risk missing connections/not being able to find things once you get to the town. I took one with Sandeman’s again, and loved it, again. My guide Andy was hilarious and super cool and knowledgeable about the area. After visiting the ossuary, we took a trip to St. Barbara’s Basilica, which was originally supposed to be larger than Prague’s St. Vitus Cathedral. I am a sucker for gothic architecture, so I was in love.

My final day in Prague was a relaxed one, as I started my day walking down to Vyšehrad, the other fortress of Prague with stunning panoramic views of the Vltava. The cathedral within the fortress is absolutely breathtaking. The best part of the place is the fact that it is a bit out of the way and is also not on the typical tourist trail of Prague- definitely something I would recommend doing if you’re spending 4 or so days in the city. On my way home, I stumbled across the Czech Beer Museum, and this one was an actual museum! With your entry ticket, you get a tasting tray of 4 large beers, which makes the entrance fee alone worth it.

I thoroughly enjoyed my time in Prague. I was glad that I spent 4 days there as I was able to take my time and enjoy myself instead of rushing through attractions. Let me know what you think!

“HOW TO” Series: Travel Hacks for Beginner Travelers