Krakow was magnificent! I know I’ve been saying that about all of my destinations on my backpacking trip, but they were all honestly fantastic. Krakow was a city that I had on my “bucket list” but wasn’t originally planning on hitting this trip- but I’m so glad that I did. 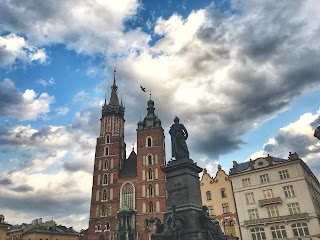 Krakow remained nearly untouched by the Nazis during the invasion and WWII, so many of the buildings date back hundreds of years and the old town square was on the first list of UNESCO World Heritage sites. There’s also a fire breathing dragon at Wawel Castle! No really, there actually is. I didn’t have the chance to go on a walking tour until my final day due to a marathon that was going on and how my excursions were planned, so a lot of my exploring was done aimlessly and without knowledge of a lot of things-Google was my best friend.

Where I Stayed
I stayed at Greg and Tom’s Beer House Hostel, which was awesome for how cheap it was-I paid $11US per night, which included free breakfast, dinner, and an hour of all you can drink free beer every night during dinner! The beds were pretty uncomfortable, but it was definitely something I could put up with for the price and amazing location-right at the start of Old Town!

What I Did
As I said before, I didn’t get the chance to go on a walking tour, something I general prefer to do right away, until my final day in Krakow. However, I still managed to do a ton of exploring on my own/with a friend I had met on my bus who was also staying at my hostel! Wawel Castle was cool to go to and wander about the gardens…I dare you to find the fire breathing dragon! I managed to hit the Oskar Schindler factory, which is an amazing museum and has free entry on Mondays (but you need to get there over an hour before the doors open or else you’ll be stuck in a mile long queue.  While in Krakow, I took 2 day trips that lasted nearly an entire day each. The first one was one that I had been anticipating for years…Auschwitz. It was probably one of the worst days of my life if we’re being honest. I’ve never been filled with so much dread in despair. It was the second concentration camp that I’ve visited and I definitely think it will be the last. However, I think it’s incredibly important that everyone visit and pay their respects at the memorial at least once in their lives. It’s life a 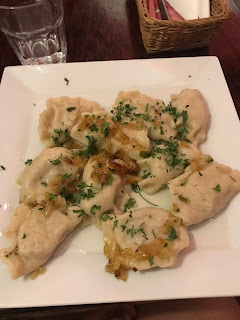 ltering. The second day trip I took was a lot more fun and much different- the Wieliczka Salt Mine. The caverns and underground cathedrals that the miners built are absolutely insane. Plus, you can lick the walls, as they’re salt (trust me, I tested it out myself)! I think it would be a shame to write about Krakow and leave out the fact I consumed an unhealthy amount of pierogi and vodka, but what’s a girl to do when she finds the most delicious Polish restaurant around the corner from her hostel??? I have Slavic blood in me, so it’s impossible to pass up carbs and meat…oops.

Krakow was like a magical fairytale…even more so than Prague! It’s still a bit off the tourist trail, so it’s so incredibly enjoyable to see a city when it’s not packed to the brim with selfie sticks.

“HOW TO” Series: Travel Hacks for Beginner Travelers