Does anyone not from the EU/Europe even know where Bratislava is? I doubt it. I had no idea until I was planning my trip. It’s the small capital city of Slovakia, situated between the Czech Republic, Poland, and Hungary. I spent about 24 hours in the city, and I found that to be enough honestly. There wasn’t a whole lot to do (especially since it was Easter weekend), but I enjoyed myself nonetheless. 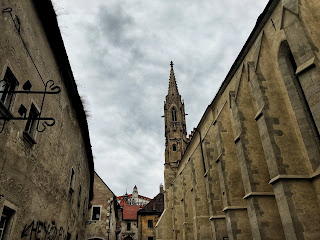 Where I Stayed
Patio Hostel-situated pretty close to the old town and only a 15 minute walk from the bus station. The staff was wonderful when I checked in, even informing me about the supermarket being closed the following day for Easter, thus advising me to stock up on food that day. I was a bit apprehensive at first because it didn’t seem like anyone was keen on socializing, but as the night went on people came out of their shells and it was a great crowd! They even have a Wall of Fame for those brave enough to conquer a shot of absinthe without vomiting. Being an American, I felt compelled to prove my drinking abilities so naturally I did it and succeeded.

What to do in the Smallest City I’ve Ever Visited
As I said earlier, Bratislava is small AF. I was a bit underwhelmed at first, as its a very communist, brutalist city architecturally. The Old Town and the castle on the hill stick out like sore thumbs. Much of the Old Town is crumbling and in derelict state, but it adds to the charm of the odd city.

Up on the hill overlooking the entire city and beyond, Bratislava Castle is different from a lot of castles and fortresses that I’ve visited. The entire castle was essentially reconstructed as it laid abandoned for years and was in a state of decay. Now it boasts the National Museum of Slovakia, an interesting look into a country I knew nothing about. There’s no easy way up, so be prepared to walk across a highway and then up a massive incline to reach the top. 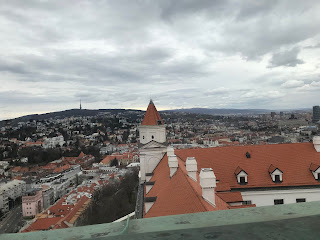 Old Town is one of the few attractions of Bratislava. It’s nice to wander and get lost down the random streets and stumbling upon quirky street sculptures. A lot of the buildings outside of the main square are covered in graffiti and are made up of crumbling facades. It’s all still charming nonetheless!
Ice cream throughout Central and Eastern Europe is delicious! Its super smooth and almost sticky, as it starts melting immediately. It’s dirt cheap too, which is the best part when you’re trying to ball on a budget!
There was definitely a few things I missed while there, such as climbing the tower of the town hall, but that costs money-something I try not to spend too much of while traveling! Check this city out if you’re in Prague (4h away), Budapest (4h away), or Vienna (1.5h away) and check another country off your list!